I have always read poems and stories on women. As a matter of fact, every piece of art talks about the grace of the women, the pain of a girl and the sacrifice of a mother. I am waiting for the day someone will pen down the emotions, feelings, sacrifices and the hardships of a man. Yes, we men do care and we are sensitive. We feel every emotion just like a woman does. We do experience sadness and we are just as sensitive. It’s just that we are forced to learn how to hide our pain and fears. Some terms have become so stereotypical with woman that we cannot imagine the term being associated with man. One such term is rape. Whenever we hear the word rape, an image of a girl being harassed by a man pops in front of our eyes. The thought about a man being a victim rather than an assailant is totally inconceivable for us.
For the past 2 months, I have been reading stories of people around the internet who are survivors of sexual abuse. In the first week, I was shocked to see the amount of people who have been harassed sexually. But now it was just a regular thing for me. Just recently I made a friend here in Bombay who was sexually harassed. He told me his story which he wants to be shared with everyone for the very fact that people will come to know that something like this is happening in their own city.
“It’s been 5 five years since I have moved to Mumbai. I came here to work for a Magazine company. The first day was quite nice. Fully conditioned and well furnished office, amazing colleagues and most importantly, open-minded people. I made some new friends and was amazing at my work. Everything was fine until our office had a new editor. Let’s call him "Mr. Sharma". We both introduced each other at the party we threw for him welcoming him to the company. He smiled at me and we shook hands. He seemed like a good guy to me until he started feeling my hand. I withdrew it quickly and I reacted as if nothing happened, forgetting everything that has happened. Just a week later, Mr. Sharma called me to his cabin. 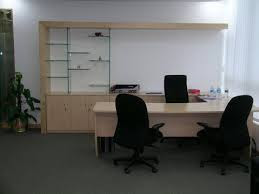 I went there and he looked at me like a cat looks at its prey. He started asking me personal questions. He asked me whether  I am seeing someone or not. I replied I am currently not. Then he asked me whats my plan for the evening. I told him that I don’t have any plan. Finally he assigned me some work that would ensure that I stay in office till the time everyone else leaves. I completed my work and saw that the whole office was empty. Only Mr. Sharma and the office boys were around. I went to his cabin to inform him I am done. He looked at me and smiled. He rang the bell and 2 office boys came running to his cabin. He stood up and looked me. I knew something was wrong here. Something terrible is going to happen. Was he about to insult me? Or bash me? Or fire me? Countless possibilities clicked in my mind within seconds. He opened his mouth, ‘Do you know that I am gonna give you a promotion? I have already spoken to the HR department about it.’ I was about to thank him but then he interrupted me. ‘ Now that I have helped you, its your turn to help me. And I am sure you will not say no, will you?’

Help ? What was he talking about? What kind of help?

‘There are two ways to do this. Either you give yourself willingly to me or we have to use a little of strength here.’ I looked at him and asked, ‘ what do you want?’ He smiled and said, ‘ I want all of you for the next 20 minutes to surrender to me. I always make it quick you know.’ I was shocked to hear this. Surrender? I had never imagined myself being in such kind of situation. What had I got myself into? I tried running from the cabin but the office boys caught me. I freed one of my hand and punched Mr.Sharma in his face. But the office boys overpowered me. Mr.Sharma looked at me and smiled yet again. He ordered the office boys to unzip my pants and gagged my mouth with my tie. They did exactly as he said. I was unable to speak and he used a cloth nearby to tie my hands. I laid on the floor completely naked, my hands tied and my mouth gagged.

He then unzipped his own pants. I closed my eyes due to fear and the next 15 minutes, I had experienced pain of unimaginable magnitude. Then that devil came near me, and told me in my ear, ‘Tell this to anyone and see what happens. This pain was just because of my love for you. You won’t be able to bear the pain I will give you due to my hate.’ He went away. The office boys untied me and went home. I cried for the next 2 hours in the office thinking about the cruel act that had just happened on me. Then I wore my clothes, catched a cab to home and that was the last time I had seen Mr.Sharma, his cabin and that office. I left Mumbai within a week and swore to never come back. Obviously I was over that incident but it took me 3 years to do so. And now I think, there will be so many people just like me being harassed by so many Mr. Sharmas out there. I hope they read my story to know they are not alone and its time we men voice our opinions against Sexual Abuse as well." 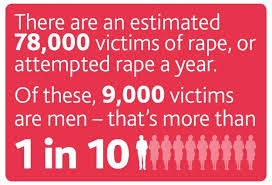 Shocked? Aren’t you? Yes, men are raped as well! But we are not aware of the fact because fewer than 1 in 10 male-male rapes are reported. . As a group, male rape victims reported a lack of services and support, and legal systems are often ill-equipped to deal with this type of crime. This is not a stereotype and that’s the reason no one talks about it. But that doesn’t mean it doesn’t exist.

HERE ARE SOME MYTHS REGARDING MEN-
(Source – Wikipedia)

1)    MALES ARE NOT VULNERABLE

By masculine gender socialization, it is thought that males, even the young, cannot be victims of rape, nor even that they are vulnerable. It is considered shameful and unmanly if a male child cries; he is seen to be strong and able to protect themselves. People sometimes forget that young boys may be weaker and vulnerable to perpetrators, who are usually stronger. The perpetrators can use whatever they have to abuse the child, including money or other bribes. An adult male may also be helpless to fight back, or fearful of doing so.

It is thought among the public that a male must be aroused if he gets an erection or has an orgasm, and so that means that they are willing and enjoying any sexual activity. An erection does not mean that the men consent to sex. Males can get erections even in traumatic or painful sexual situations,and this does not indicate consent.

Much like female erectile response, male erectile response is involuntary meaning that a man need not be aroused for his penis to become erect; mechanical stimulation is all that is necessary. Arousal and stimulation are distinct things. Stimulation is a physical response to a stimulus. Men can be physically stimulated without feeling aroused and thus causing an erection. Men can be scared and intimidated into an erection, especially if the person is older or an authority.

It is sometimes argued that males are less traumatized by the abuse experience than females. Some advocates have claimed that males are less negatively affected. More studies show that the long-term effects are quite damaging for either sex and males may especially be more damaged by social stigma and disbelief of their victimization.

Henry Leak, the chairman of the Survivors organization, noted that rape of males, as with females, has more to do with power than sexuality, and does not only happen inside the homosexual community. Sexual orientation is a complex issue, and the majority of male perpetrators who seek out boys are not homosexual.

Male sexual assault victims often fear being seen as gay or weak, or believe that their assault may be due to their appearance being effeminate or homosexual so as to attract other males. Experts do not believe that premature sexual experiences play a significant role in later sexual orientation. Research by Jane Gilgun, Judith Becker and John Hunter states that while many perpetrators may have experienced sexual abuse of their own, most sexual assault victims will not go on to become adolescent perpetrators.

Ontario Coalition of Rape Crisis Centers coordinator Nicole Pietsch stated that male victims face hurdles like the myth that sexual violence is something the male victim wants when the perpetrator is a female. In this case, the public may say that the victim is lucky, characterizing the experience as a positive thing when it was in fact not. 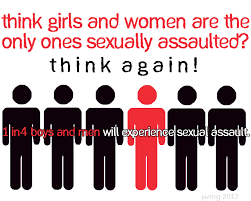 BECAUSE OF GENDER EXPECTATIONS, BEING A MALE CHILD VICTIM OF SEXUAL ABUSE CAN LEAD TO -

1.   Pressure to prove his manhood physically and sexually (becoming stronger and      engaging in dangerous or violent behavior; having multiple female sexual partners).
2.   Confusion over gender and sexual identity.
3.   Sense of being an inadequate man.
4.   Sense of lost power, control, and confidence to his manhood.
5.   Problems with closeness and intimacy.
6.   Sexual problems.
7.   Fear of becoming 'homosexual' or 'gay'.
8.   Homophobia

It’s time we break the silence as well as bust the myth regarding rape on men. Send your opinions to us at info@poddarfoundation.org 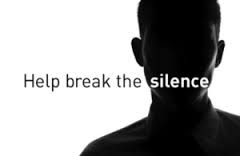 Posted by Poddar Foundation at 01:45